Kiryu is well known not only in Japan but also in the world as a town of textile. However, the silk industry needs many peripheral industries including “Sericulture”, “Silk” and “Weaving”. In order to network the buildings, facilities, entertainment etc. related to them to the area promotion, sightseeing, cultural projects etc, network to Gunma prefecture to “Gunma silk heritage”
It was registered. Kiryu who was producing silk fabrics since the Nara era has a lot of silk heritage. 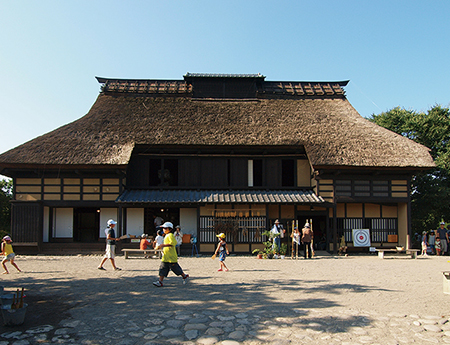 In the architectural style in which the center of the front of the roof which is often seen at the foot of Mt. Akagiyama is rounded up, it has a structure that makes it easy to take in light and wind to use the attic for silkworm.。

The textile of the hydroelectric power plant where Nihon Textile Co., Ltd. began operating in 1822, and now it is in the Taisho period. It was used not only for factories and lodging houses, but also for electric lights in Kiryu city (then town).

It is the oldest Western style stone building in the prefecture at the twisting factory office building ware built in Taisho 6 years. Once a saw-roof factory lined up in the premises, it was one of six “model factories” nationwide, mechanized “yarn twist”. Currently, Kiryu City’s local materials are exhibited.

The Hori yu textile factory succeeded in developing a unique ribbon weave using artificial silk thread for weft thread and silk for warp thread. Existing stone saw saw roof factory has finished the outer wall by Oya stone and the interior by plaster coating. Currently it is used as a beauty salon.

A Kanezen fabric company, which founded a large-scale textile factory in Kiryu City, was built around the Taisho era and was used as an office. Building on the 4th floor above ground and 1 basement, it was a building of reinforced concrete early in the prefecture, it was one of the symbols of Kiryu Shinmachi at the time.

Besides existing wooden saw roof factories, yarn storage, warehousing warehouses and the like show the textile production system as it is, and can be visited if booked.

Three consecutive saw roof factories of wooden steel plate roofing are factories that are still in operation. We make efforts to restore the traditional technique of Kiryu cloth and to succeed it by utilizing the technique of the calling which is a high-class fabric, weaving costumes of Bunraku dolls and costumes of kabuki.

A ventilation tower stands on the roof and a circular ventilation window is set up in the wall in the saw roof factory of five Oaya stone built which was built in Taisho 11 (1922). It is representative in the “saw roof factory” which can be seen in the Shigetsu Building District.

Since the formation of Kiryu Shinmachi from Tensho 19 (1591), this district has supported Kiryu’s economic development as a center of textiles. The textile industry of Kiryu celebrated its peak in the early Showa era from the Taisho era. In the townscape of Kiryu Shinmachi at that time, shops such as buying traders, yarn traders, kimono traders, dyeing businesses, etc. were laid out.

The predecessor was established for the technical improvement of the dyeing industry in 1888, and later the Kiryu and Isezaki test sites were integrated to become the current textile testing site. In addition to weaving, dyeing and processing research, we also conduct genetically modified silkworm silk research.

Old Aoki family residence is the birthplace of “Seikaisha” with a modern factory equipped with engines and boilers in the early Meiji Period.

It was built as an office of the Kiryu textile cooperative association founded in 1934 for the improvement of Kiryu textile. It has a western-style appearance using turquoise tile with blue-green tiles and stained glass for scratch tile sticking. Currently it is open to the public as “Kiryu Textile Memorial Museum”.

Textile reference museum “Yukari” is an experienced museum that uses Morihide fabric’s former cookhouse, former warranty place, former saw roof factory and so on. In the hall, you can visit the dyeing, experience of hand weaving, learning of the history of the fabric, old loom etc.

Originally called “Kitagawa woven factory”, now it is used as a creative workshop for sculptors and painters as well as architectural design office as “no shrine building”. Existing saw saw roof factory was built in Taisho 5 (1916) and was operating until around 1945.

At the textile factory founded in the early Meiji era, the factory was completed in December 1988, and initially it was a six-sided saw roof. It is the only existing brick-made saw-roof factory in the city, and it is now used as a “bakery cafe brick”.。

It is a shrine that fascinates the gods of legendary fabrics such as “White Princess” which conveyed textile technology from Kyoto. In the precincts there are big rocks called “descent stones” that they heard aircraft sound when listening, and zelkova, which is said to be over 300 years old, have a mysterious atmosphere.

Hikobe Manor is famous as the oldest private house building in the Kanto region, but the north side of this main shop was used as a dyeing factory since the Edo period. Furthermore, from the Meiji era to the Taisho era, we built a saw-toothed roof factory, a dormitory and a medical office and became a modern textile factory.